Just as the title reads, today (February 21), Mary was spotted on the set of Birds of Prey in Los Angeles filming a scene as her character Huntress. In it, it seems that her character is following Margot Robbie’s character Harley Quinn and actress Ella Jay Basco who plays Cassandra Cain. Head to the gallery to check out the new photos! 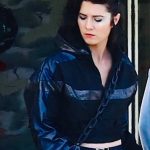